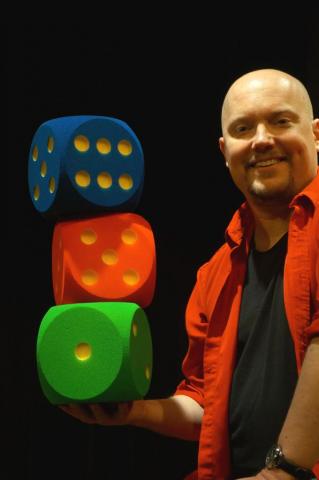 Andrew Barnett Jones loves telling stories. In fact, he has made up stories for loads of top TV shows including Numberblocks, Mr Bean: The Animated Series, and Dick’n’Dom’s Diddy Movies.

Now he’s coming to Pegasus to tell you a story – but he has no idea what it is. No title, no characters, not a single word in his head.

Instead, with your help, he’ll be playing The Story Game, creating a hysterically funny, wildly creative story from a handful of words, a roll of the dice, and his own roller coaster imagination.

If you’ve ever wondered where writers get their ideas from, now’s your chance to find out – and once you’ve seen him in action, you’ll be inspired to use his simple, practical methods to play the Game yourself and make up your own madcap stories!

Star of CBBC’s The Slammer in a wide variety of wigs, winner of the Children’s Choice Award for Funniest Voice, and previous holder of the Crick Crack Club’s Grand Liar’s - making him officially one of the biggest liars in the country (honest!) - Andrew is known to thousands of theatregoers across Great Britain.