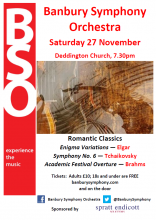 Banbury Symphony Orchestra are back for the 2021/22 season and are delighted to be performing again with this autumn concert.

On Saturday 27 November, we will play three major works, including the popular Enigma Variations from Elgar.

Johannes Brahms’ Academic Festival Overture is one of his sunniest orchestral pieces, written in 1880 as a tribute to the University of Breslau, who had awarded Brahms an honorary doctorate in philosophy. Although he had intended to simply write them a thank you letter, he was persuaded that he should provide a more formal musical acknowledgement. This overture was the result - although the university alumni may not have expected to receive an overture humorously crafted from a series of student drinking songs!

Elgar’s Enigma Variations, written in 1898/99, contains an ‘Enigma’ theme followed by 14 variations, each intended to portray one of his close acquaintances. The piece has come to represent an essential expression of friendship through music. Elgar himself wrote in a programme note that “This work, commenced in a spirit of humour & continued in deep seriousness, contains sketches of the composer's friends. It may be understood that these personages comment or reflect on the original theme & each one attempts a solution of the Enigma.”

The Sixth Symphony of Pyotr Ilyich Tchaikovsky was the composer’s last completed symphony. It was first performed in October 1893 with the composer conducting, just nine days before his death. Tchaikovsky gave the work a Russian title meaning "passionate" or "emotional". The composer’s title describes the music perfectly – the music encompasses a huge range of emotions. The shift from super-charged excitement in the third movement Scherzo to the outpouring of the final movement is a truly shattering transition.

Tickets are £10 and 18s and under remain FREE! Tickets can be bought from our website https://www.banburysymphony.com/autumn-c...
Advance booking strongly recommended.

COVID-19
We would encourage our audience members to wear a mask where possible to protect yourself and others and reduce the spread of Covid-19.
Please do not attend if you have any symptoms of Covid-19 or if you feel unwell.