Last edited by scubacello on 21 February 2021 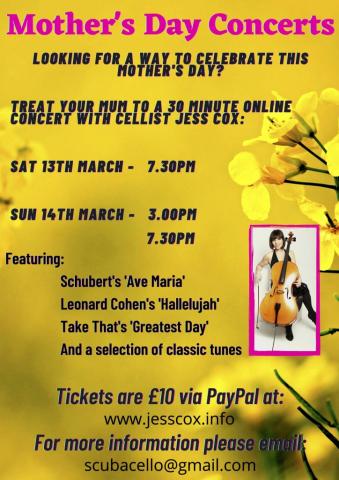 Looking for a way to celebrate Mother's Day, Sunday 14th March 2021? Enjoy a 30 minute live cello concert streamed into the comfort of your home or buy the concert as a gift for your mum or granny to show them you're thinking of them. Choose from 3 different concert times over Mother's Day weekend to suit you.

Music will include Schubert's 'Ave Maria', Leonard Cohen's 'Hallelujah' and Take That's 'Greatest Day' and is suitable for all ages.

Oxfordshire based professional cellist Jess Cox has performed with Jeff Lynne’s ELO touring band since 2016 to audiences of more than 200,000 around the world at prestigious venues that include Madison Square Gardens, Wembley Stadium and the Hollywood Bowl. She has appeared on BBC’s ‘Jools Holland’ and BBC’s Radio 1 Live Lounge. She’s recorded for various films including ‘Wonder Woman 1984’, ‘Dunkirk’ and ‘Mission Impossible: Fall Out’ as well as on Sam Smith’s title track ‘The Writing’s on the Wall’ for the James Bond film ‘Spectre.’ She has performed live with artists that include: Bjork, Brian Wilson, Ellie Goulding, Kanye West, Years and Years and The Specials and has recorded on albums for Paul Weller, Pete Tong’s ‘Ibiza Classics’ and Ocean Colour Scene Live at Bridgewater Hall with Q Strings.

As a soloist and duo partner with pianist Jennifer Vizinet, Jess has given recitals worldwide from South Korea to Nova Scotia for Cunard. With a love of theatre she has performed frequently in London’s West End as well as shows for The National, Sadlers Wells, National Theatre of Scotland and The Royal Shakespeare Company.

Jess will play live to bespoke piano backing tracks which have been specially recorded for this event by pianist Jennifer Vizinet.
Jennifer has a BA Hons degree in music from the University of York, a post-graduate diploma in piano accompaniment from the Royal Academy of Music as well as being awarded the Meaker Fellowship and a Masters of Performance with Distinction from The Guildhall School of Music and Drama.
Jennifer is a staff accompanist at Guildhall School of Music and Dance and pianist for Royal Academy of Dance.

For more information or to make a booking via PayPal please visit www.jesscox.info and email www.scubacello@gmail.com to request which concert you would like to be sent a link for.