Last edited by Ktelford on 6 February 2020 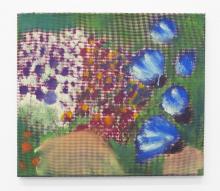 Informality is pleased to present Behind Closed Doors, a solo presentation of recent paintings by Swiss artist Diane Chappalley, now based in London.

For Chappalley, a sunflower can be imagined, autobiographical and art historical all at once. They appear in her paintings from time to time - singular or in clusters - bloated and sun-drunk with drooping heads. Often they are entangled in verdant knots of flora which refer to the landscapes of both the Swiss Alps where she grew up and the hidden green spaces of east London, where she now lives and works.

The title Behind Closed Doors alludes to a more private, domestic space - somewhere perhaps unknowable to the viewer. On closer inspection, these paintings cannot easily be described as landscapes in a traditional sense - the spaces described are often dense and feverish; misleading the eye. Using complementary colour to evoke shape and space - Chappalley builds up a visceral surface of course, dry paint - the rough surface of the flax linen providing staunch resistance to the brush. Short, fast strokes accumulate into thickets; smudged and matted undergrowth is depicted with ground-in earthy browns and acidic greens - intensified by spritely flashes of red, yellow and blue suggesting flower heads. And then, all of a sudden, you notice that the sunflowers don’t have stalks - some appear to be floating above the horizon - and in the painting Monte Verita, the sky is wrought in an unnatural, apocalyptic crimson.

Smaller works are painted directly onto gingham linen, recalling themes of the picnic in historical paintings such as Edouard Manet’s 'Le Dejeuner sur l’herbe' and Claude Monet’s 'Luncheon on the Grass'. The grid-like structure of the material alludes to both domestic and utilitarian ideals - indulging in a kind of rustic fantasy of a tune that neither the viewer nor Chappalley belong to. A personal symbology is at work here, the gingham gives a feeling of nostalgia which is harder to reason with. This peculiar blending of place and time - weeds from fecund canal verges in Walthamstow, hardy Edelweiss plants that grow up the sides of the Swiss mountains, and the pastoral landscapes of Les Nabis - is a process of distillation, a private conversation that happens alone in the studio of which something remains hidden. The clumps of foliage that often dominate the vistas of Chappalley’s world seek to obscure rather than reveal - the abstract, gestural brushstrokes treading a thin line between representation and decoration.