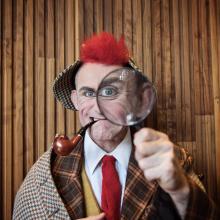 Tweedy is putting on a large-scale theatre production of Sherlock Holmes. He’s built the set, gathered the props and booked the theatre for the show. There is just one problem – Tweedy has lost all the actors!

Tweedy calls on his faithful friend Monsieur Loyal for help, and together they must solve the mystery of the missing actors whilst performing the whole show between the two of them.

How hard can that be?

Come along to Pegasus on January 25 to help Tweedy find the clues and finish the show, or just come to witness the hilarity that unfolds as he tries. Either way it will be a mayhem filled mystery, the like of which the world has never seen.

Having previously thrilled and delighted audiences with Illusion Confusion, Tweedy is back with this brand new hilarious extravaganza.