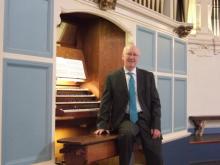 Organist Malcolm Pearce is a recitalist, accompanist and choral director. He received his early musical training as a Quirister at Winchester College. He studied at King’s College, London and the Royal College of Music, winning the Walford Davies prize for organ performance in his final year. He was Director of Music at Magdalen College School, Oxford from 1981 to 2007. Currently, he is conductor of the choir of Oxford University Press and is involved in diverse projects, ranging from the early music to contemporary repertoire. In addition to accompanying and continuo work, he has given solo and concerto performances on the organ at home and abroad and has made CD recordings. As a composer he is regularly commissioned and his work has been published, recorded and broadcast on Radio 3.