Last edited by valtate_uk on 2 February 2018 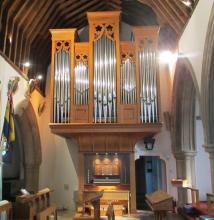 Note: this free event replaces a concert by Oxford Concerto Orchestra, cancelled due to ill-health.

John Hounam (violin) and Christopher Fletcher-Campbell (St Peter's Director of Music/organ/piano) will play a programme including a Mozart violin sonata and a varied selection of English organ music.

John Hounam is an accomplished violinist, skilled instrumental teacher and artist. He enjoys helping amateur players to achieve their potential and to improve their understanding of classical music.

John began his career as a member of the BBC Scottish Symphony Orchestra, before working as a freelance violinist in London for ten years. During this time, he was a founding member of the European Baroque Orchestra. He later moved to Argentina, where he appeared as soloist with the Mendoza State Orchestra and Musica Antigua Mendoza. Back home, in 2000, he produced the UK’s first tango CD with his tango band, Passion Canyengue.

Christopher Fletcher-Campbell has been teaching music for many years and is passionate about encouraging people, young and old, to learn, appreciate and enjoy music. He is widely admired for his energy, enthusiasm and enterprise. As well as being on the music staff at Abingdon School, he is Director of Music and Organist at St Peter's Church Wolvercote. In his spare time, he conducts two amateur orchestras, the Oxford Studio Orchestra and the Wantage Orchestra, as well as the Wheatsheaf Consort, a choir performing church music in cathedrals and churches across the UK. Before teaching at Abingdon, Chris was Director of Music at Bloxham School for ten years. He began his teaching career as a classics teacher (he read ‘Greats’ at Magdalen College, Oxford).