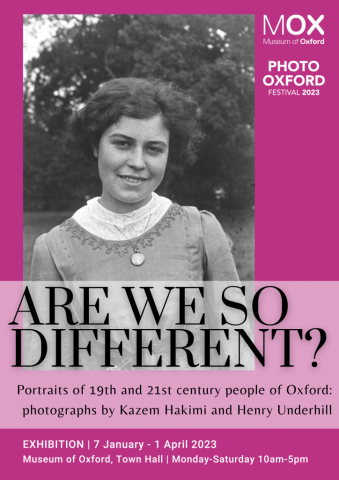 This temporary exhibition at the Museum of Oxford brings together portraits of Oxford citizens, taken about a century apart.

Henry Underhill, a grocer with a shop on the High Street in the late 19th/early 20th century, took striking photographic portraits of his friends and family in their moments of leisure. Some 100 years later, Kazem Hakimi, owner of the well-loved chip shop on Iffley Road, takes similarly candid photos of his customers, quickly capturing them as they’re waiting for their order.

The photos are exhibited side by side. The selection was made by Mr Hakimi and the Museum staff, and is mostly based on perceived similarities, for example in composition, facial expression, or fashion accessories.

We invite visitors to try and spot the similarities, while at the same time noticing differences between lives past and present, and perhaps asking: what will a similar exhibition look like a hundred years from now?