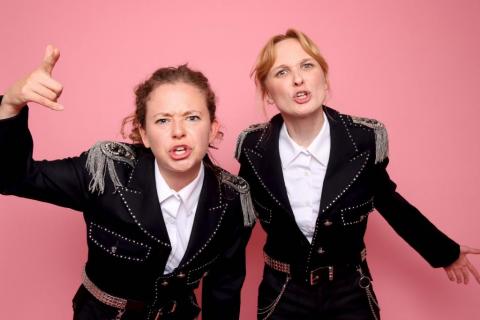 “Don’t you think it’s pretty f*cked that a lot of stuff we do in the prison, like if we were to do that in the street we’d get arrested straight off.”

Award nominated, 5 star show Cell Outs comes to the Old Fire Station. A dark comedy written and performed by two ex-prison officers, Cell Outs gives an insight into the world of those working behind bars, and the sacrifices made to ensure survival.

Harriet and Ella join a dubious grad scheme which promises to fulfil their wildest social justice dreams. Equipped with their humanities degrees and bright-eyed naivety, they’re catapulted onto the landings of London’s most dangerous jails as full time prison officers – fresh cut keys, squeaky boots and blind enthusiasm at the ready. Watch as their worlds descend into burnout and brutalisation as they sacrifice their sleep, integrity and ultimately their identities to perform an impossible role.

Cell Outs draws on these ex-officers’ experiences and the stories of those they worked alongside.

★★★★ “Execution is brilliant. Troup and Church have conjured a moving and insightful story out of their stories and others” – London Theatre 1