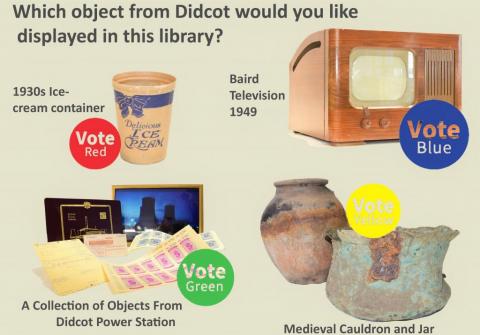 Didcot Library Users: We Need Your Vote!
Which museum object would you like to see on display in the Didcot library?

The most popular will be on display early next year accompanied by events delivered by Oxfordshire Museum Service staff. Voting ends on 17th December 2022. You can vote personally on the library or via Facebook: https://www.facebook.com/BicesterLibrary

• Ice-cream container from L Smallbone’s, 222 Broadway, 1930s
In the early 1930s Broadway became the town’s thriving shopping centre. Leslie and Betty Smallbone ran a tobacconist and confectioner’s shop at 222 Broadway in the 1930s, where this ice cream cup was sold.

• Baird television 1949
This television belonged to a family from Didcot who worked at Harwell and were always interested in the latest technology. Only few households would have owned a television in the 1950s. Broadcast hours were strictly controlled by the Postmaster General. No broadcast went out between 6 and 7pm for a while to make it easier for children to be put to bed, a time slot known as ‘toddler’s truce’. It was dropped in 1957.

• A collection of items from Didcot A Power Station
Didcot A Power station operated from 1970 until March 2013. Its impact on the landscape with its striking cooling towers often divided opinion but became the defining image of Didcot. In 1968 Didcot A won a Civic Trust Award for how well it integrated into the landscape, but in 2003 a poll in Country Life magazine judged it to be Britain’s third worst eyesore.

The items here came from the training room at the station:
Work order: This is an example of a typical work order issued to the engineers working at the plant in 1974.
Fuel tokens and fuel ration book: These were issued for the working vehicles on the site during the oil crisis of 1974.
Placemat set This leatherette table set came from the training room at the power station while it was operated by Central Electricity Generating Board between 1970 and 2004.

• Medieval cauldron and jar
The 11th to 12th century bronze cauldron and jar were found by a metal detector user on the outskirts of Didcot. The cauldron was placed on top of the jar as a lid and has been repaired many times with patches. The repairs tell us how important the cauldron was to its owner, but we do not know what the jar may have contained.

This is your chance to become curators and decide what is on display in Didcot Library. What object evokes the most memories and interest for residents of Didcot? Do explain your vote on the Library Facebook page.