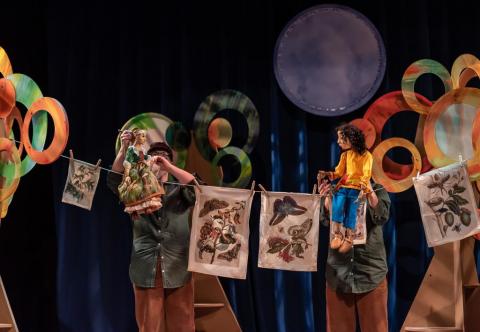 Join lost budding scientist Jina on her adventure home, empowered by some of history’s super-STEM women. Digital-coder Ada Lovelace, glamorous inventor Hedy Lamarr, ‘radiating’ Marie Curie and pioneering astronaut Mae Jemison are amongst those offering Jina scientific gifts of curiosity, courage, creativity, persistence and open-mindedness, to help her find her way and follow her dreams to become a scientist!

"The artistry and craft reach the outer pinnacles of brilliance." - The Reviews Hub

"Will inspire a new generation" - The Stage

HMDT's new multi-media musical puppet show is based on the discoveries and stories of historical STEM women who fought against the odds to pursue their flair for scientific enquiry, but were often unacknowledged for their discoveries and frequently encountered discrimination and prejudice along the way.

From rap to Motown, jazz, opera and musical theatre, this “expertly crafted, highly imaginative” (Opera Magazine) and “witty and enlightening” (Musical Theatre Review) musical created and performed by an all-female team, will entertain and inspire children and adults alike!