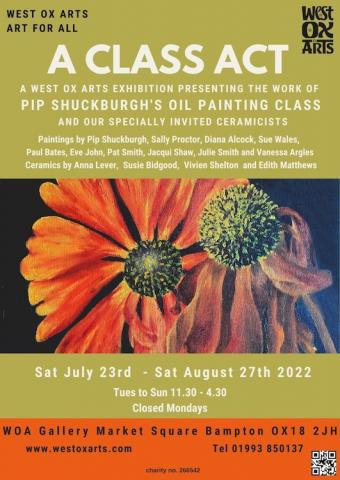 A Class Act: An exhibition showcasing exciting work from Pip Shuckburgh’s oil painting class with a selection of specially invited ceramicists.
At West Ox Arts, we are delighted to announce our forthcoming exhibition which presents the talents of Pip Shuckburgh and members of her oil painting group. Also on display will be the work of four ceramicists who will be exhibiting alongside the oil painters from 23 July through to 27 August at the WOA Gallery, located in the heart of Bampton, Oxfordshire.

Pip’s students, a mixture of early career and more established artists, will exhibit a cross section of their work.

“This is our first exhibition as a group, which started in 2017, so it is very much toes in the water. It is all good for them to see what it feels like to put on an exhibition and make choices of which painting to display”.

Pip Shuckburgh, was born and brought up in Oxfordshire. Having enjoyed an illustrious career in illustration and commercial art, Pip decided in the 1990's to become an oil painter, and joined the 20th Century Art Group in Oxford. After a few years she held her first solo exhibition in the WOA Gallery in Bampton, Oxfordshire. The exhibition sold well and subsequently she has exhibited in London and across the country.