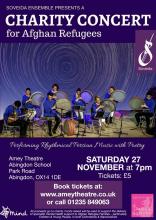 The Soveida Ensemble was first established in 2014. Based on a long since forgotten form of Classical Persian music, the Soveida Ensemble performs on some of the oldest instruments created by man, including the Tanbour, Setar, Tar, Daf, Tombak and Ney.

This particular style of music called Taghti’i-Igha’i was formulated and classified for the first time about seven centuries ago by Safie-Din Ormavi and Hafez Marâghi, and was spread throughout Iran and India by Shâh Ne’matollâh Vali.

This style of music is a rendition of ancient rhythms that have been passed down from one generation to another, from teacher to student, over thousands of years.

Even though these rhythms have been employed in the East for centuries, the Soveida Ensemble is the first group who has presented them in a concert format for the benefit of a Western audience. For this reason, it brings us a unique opportunity to experience the only group playing this specific strain of Classical Persian music in the world. The Soveida Ensemble has been welcomed by audiences in Germany, France, Belgium, Sweden and across the UK.

The songs are especially selected and composed based on poems by Rumi, Hafez and Saadi, around the message of humanity and unity.

Tickets are priced at £5 with the option to donate an additional amount if wished. Funds raised will be used to support MIND in the delivery of specialist mental health support to Afghan Refugee Families – particularly Children & Young People. In both Oxfordshire & Warwickshire.