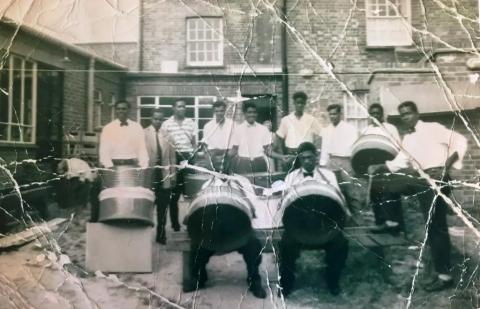 In 1948, responding to a call from their mother country, 539 people from the West Indies/Caribbean boarded a ship bound for London. The ship was named the Empire Windrush. The call was for labour, much needed in post-war Britain. The people who followed it have collectively become known as the 'Windrush Generation'.

Thousands of people from the Caribbean responded to the government’s invitation between the 1940s and 1970s. Their contribution is still making a difference today. Many came to help build the fledgling NHS, work in essential services like transport, and - in Oxford - to work in the Cowley plant. As well as rebuilding the economy, they helped shape our culture, greatly influencing aspects such as music, fashion, food and the arts.

In 2018, the Museum of Oxford featured an exhibition to mark the 70th anniversary of this important event. The exhibition was curated by the African and African Caribbean Kultural Heritage Initiative (ACKHI), the Ber-Bedo Kelo Lonyo United Women’s Organisation (BKLUWO), and other members of Oxford's African-Caribbean community.

This display showcases some key elements of this exhibition, including objects, photographs and interviews with community elders.

As a continuation of the 2018 project, an immersive West Indian/Caribbean front room reconstruction was installed in a shopping unit on Between Towns Rd (part of the Temple Cowley Shopping Centre). This is run by the ACKHI with support from Fusion Arts and can be visited on Tuesdays and Thursdays. To find out more, follow the Oxford Windrush Group on Facebook and visit www.ackhi.org

Entry to all Museum of Oxford galleries is free of charge.
We encourage you to book your timed slot at www.museumofoxford.org (we do reserve some walk-in spaces).