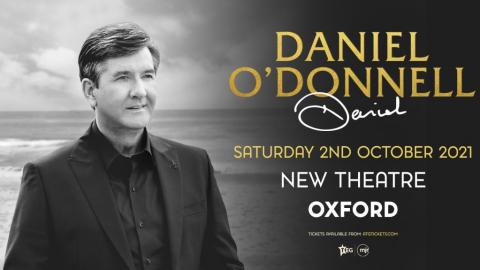 The affable and unassuming international singing star Daniel O’Donnell, one of Ireland’s best known performers from Australia to Alaska, has continued to push out the boundaries of his career both on stage and TV in 2018 and looks to do the same in 2021.
Daniel O'Donnell is the only artist in the world to score a hit in the UK album charts every year since 1988, an unprecedented and unbroken 32 year span and in doing so, he has outshone everyone from Michael Jackson and Madonna to U2 and the Rolling Stones.

Daniel’s latest Album, The Gold Collection released in the UK & Ireland on the 1st March 2019, entered the UK charts at #9, further cementing his unbroken record of chart hits. This sixty track three CD compilation features recordings from across his entire recording career and features duets with his long-term singing partner Mary Duff, along with special duets recorded with Loretta Lynn and Charley Pride.

There is no doubt but that Daniel intends to continue touring around the globe with his unique, life affirming shows of music, song and laughter, for a long time to come.