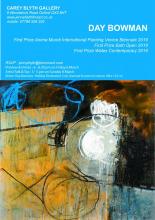 How deeply are etched within us our childhood memories - where time stood still, the days unending, where our sources of delight and adventure were imbued with a sense of wonder, where everything felt yet to be discovered.
Day Bowman’s childhood days were spent in the Somerset town of Minehead, and it is the landscape of that unassuming post-industrial beach town that forms the bedrock for her painting. Her hometown was recorded in the Domesday Book but dates back to the Bronze Age. Strategically located on the coast, it grew from busy trading post in the 1500s to industrial town of the 1800s shipping herring, wool, cattle and coal to Bristol, Wales and Ireland. Industry fell away to larger ports, leaving a detritus of abandoned mining and industrial ‘architecture’. With a new railway line and a pier, Minehead re-emerged as a fashionable Edwardian seaside resort, and remains today a bucket-and-spade summer holiday destination.
There is an echo to the ’layering’ in this coastal town that we see in Bowman’s work. Her paintings are complex. Her skill is the alchemy of juxtaposing the different elements that command her attention, composing abstract paintings that are balanced and fluid. There is terrific strength and confidence in her work. Movement abounds. She balances blocks of black with trapeziums of rust, where ribbons of colour and charcoal encircle pools of light, and scribbled hearts and footprints belie the depth of darker planes and corners.
It is the ‘behind the scenes’ landscape of a ghosted industry and deserted winter beaches that fire her imagination. Bowman’s paintings are experiential - Urban Wastelands resonate with the echo of footsteps - running ‘tag’ through giant concrete tunnels, the plink of metal on metal, the dynamic and drama of a wasteland tableaux that characterized ‘playgrounds’ for children of the sixties.
Bowman returns to the beaches of childhood in her recent paintings of Plashy Places. Wet sand glistens as the incoming and receding tides of Flood and Ebb erase calligraphic marks etched momentarily into surface, where the pooling of seawater and reflections play out in oil on canvas. Capturing the abandon of play, Bowman recalls W B Yeats’ Man From Faeryland, who, careworn with the fears and concerns of adulthood, observes the humble lugworm rising to the surface, singing of higher places and golden skies …
Bowman’s new and larger paintings of Holiday Destinations I, II & III combine elements of both beach and wasteland. A ribbon of sky blue colours up against rust and golden ochres, where spectrums of ghost whites and greys ignite against the drama of a black backdrop.
While her post-industrial abstractions resonate with rigour and dynamic, sculpting shape and movement across the canvas, so Day Bowman’s beach paintings of Plashy Places capture the magic and beauty of the littoral shoreline, a perpetual dance between sea and land - that tangential, kinetic point at which figuration and abstraction play out.

2019 has been a big year for Day Bowman. She was the Winner of the Anima Mundi International Painting 2019 at Venice Biennale 2019; awarded First Prize for Painting in Bath Arts Open 2019; and won First Prize in the Wales Contemporary 2019. A graduate of Chelsea School of Art and London University, she has exhibited widely with solo exhibitions over 15 years touring in Museums across UK, Germany and China where in 2017 she showed with Contemporary Masters from Britain. In 2012 she was commissioned to create giant hoardings across Weymouth to mark the Olympic Sailing. She has paintings in international collections, and works from her studios in London and Dorset.