Last edited by JamFactoryArts on 28 January 2020 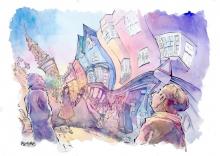 Join us at The Jam Factory to for the opening night of Joshua Squashua's exhibition - Misillusions: Alternative Perspectives of Oxford!

You may have spotted street artist Joshua Squashua transforming some of Oxford’s many vacant storefronts into pop up galleries, or sketching with speed and agility in odd places around town. The collection of paintings hastily taped to plywood or dark windows capture a beauty easily missed by the busy commuters that rush by, though many are brought to a sudden stop by this flash of warm colour on grey street corners. Squashua’s wavy, dream like studies of everyday life in Oxford City glow with the light of golden hour seen through rose tinted lenses, capturing an alternative perspective of what some might consider mundane.

The artist is inspired by the Fibonacci spiral, discovering the golden ratio that is so often found in nature amongst the paths and spires of Oxford. Reality is warped and wonderful in Squashua’s paintings, which pop up like an urban phenomenon unpredictably across the City. Joshua Squashua’s travelling gallery of artwork finds stable walls at The Jam Factory from the 21st February to the 20th of April this year, in his first solo show ‘Misillusions: Alternative Perspectives of Oxford’.

Curated by Eleanor Monk, with thanks to The Covered Arts.