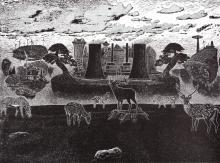 Sarah Wiseman Gallery is delighted to announce Twilight by Ade Adesina from 7th -28th March 2020. In this thought-provoking show of large-scale prints, Ade will exhibit recent prints which will include works from collaborations with other acclaimed artists such as June Carey and David Mach.

Ade Adesina’s monumental lino-cut prints juxtapose motifs such as the baobab tree, as well as buildings, bridges from cities around the world, to pieces of oil-extraction infrastructure from his home in Aberdeen. These complex works are a commentary on the human impact on earth. His visions are surreal and dream-like; in his prints he has turned the earth turned on its head with fish swimming through the air, scorched deserts scattered with sinking ships. He says that ‘Issues such as pollution, climate change, religion, endangered species, human survival and adaptation are things that I have always focused on in my work.’

He says ‘I work in a very strange way. Every print, sculpture or painting owns a story; it is like reading a novel. There are different characters coming in at different chapters. I don’t find it interesting knowing where a piece of work is going to end before I begin. I can start on the earth and end on the moon. What I enjoy most includes not knowing what direction a piece of work is going.’

Ade Adesina was born in Nigeria in 1980, and studied at Gray’s School of Art in Aberdeen. He is one of the youngest ever Royal Scottish Academicians (elected 2017) where he has had a recent solo exhibition ‘Aurora’ in the Academician’s Gallery.