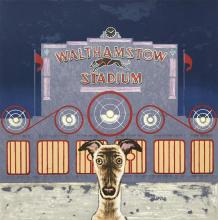 Print-maker Mychael Barratt dives deep into Oxford’s varied history with a new map, and other prints to be revealed exclusively at his solo exhibition at Sarah Wiseman Gallery.
Mychael Barratt is best known for his printmaking and painting inspired by his boundless knowledge and enthusiasm for culture and history. His work often takes the form of a humorous homage to great artists, such as with his ongoing Artists’ Cats and Dogs series, where artist’s pets pop up in their owner’s most famous paintings. He is also known for his ambitiously produced maps.

Mychael’s interest is in the anecdotal, as well as the obscure details of history that characterise major cities. Recent subjects include a large-scale etching entitled ' A New York Map of Days' , a highly detailed exploration of New York City via its historic daily events. Other maps explore London; for example, ‘A London Map Of Days’ , another large-scale original print, was made using eight etching plates, joined together, and features 366 date specific references to events or people throughout London’s history.

‘I have an immigrant’s zeal for my adopted city [of London] that constantly permeates my work,' says Mychael. ‘The choice to settle here and to think of myself as a Londoner (though I’m still a Canadian) informs much of my life and artistic choices,’ he explains.
For his solo show ‘Hidden Histories’ at Sarah Wiseman Gallery, Mychael is planning a brand-new map, this time featuring Oxford. He’s reluctant to share exactly what we can expect to be included, however he has promised it to be ‘the star of the show’ - and there are sure to be surprising new stories he has unearthed about the city of Dreaming Spires.
Gallery director Sarah Wiseman says ‘Maps are often seen as objective representations of places on the globe; however, they are in some respects very subjective views of the world. Borders could be altered, centres of power inflated, or other locations even omitted all together. It stands to reason that some artists like Mychael, choose to make a statement about the world in some way, using a map.’
Mychael Barratt was born in Toronto, Canada, however, considers himself to be a Londoner since arriving for what was supposed to be a two-week stay thirty years ago. He is a narrative artist whose work is steeped in imagery relating to art history, literature, theatre and everything else that overfills his bookshelves. He was an artist in residence for Shakespeare’s Globe Theatre throughout Mark Rylance’s reign as Artistic Director.
In 2011, just prior to the 2012 Summer Olympics, he was commissioned to paint a large-scale mural on T. V. Edwards Solicitor’s building on the Mile End Road. He is a Fellow of the Royal Society of Painter-Printmakers and in 2013 was elected to be its twelfth President, stepping down earlier this year to concentrate on new commissions.
Mychael’s work is held in many important collections including Her Majesty The Queen, British Museum, the British Library, Ashmolean Museum, V & A Museum, and the Jiangsu Museum of Contemporary Art.