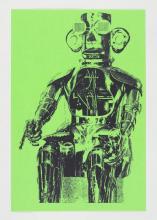 Sir Eduardo Paolozzi (1924–2005) was one of the pioneers of the pop art movement in the UK. Born in Scotland, Paolozzi was a compulsive collector and a jumbler of icons. He is equally revered for his mechanistic sculptures and his kaleidoscopic print projects. The artist, who described himself as 'a wizard in Toytown', transformed the mundane, the derelict and the mass-produced into images that zap with electric eclecticism and impress with their graphic complexity. 'Carrots into pomegranates!'

Paolozzi's canny alchemy is vividly apparent in General Dynamic F.U.N, a series of fifty screenprints and photolithographs created between 1965 and 1970. Here Paolozzi employs the technologies of mass-reproduction and gorges on its idols – the household names and familiar faces of consumer advertising, high fashion and Hollywood. The artist's friend and sometime collaborator, J.G. Ballard, described General Dynamic F.U.N as a 'unique guidebook to the electric garden of our minds'.

The prints, which bear idiosyncratic titles such as Totems and Taboos of the Nine-to-Five Day; Twenty Traumatic Twinges and Cary Grant as a Male War Bride, do not occupy a rigid sequence but can be assembled and viewed in any order. For Paolozzi, the modern age, exposed as ephemera, is a necessarily fragmented collision of visual stimulus and influence, and his work is a 'health warning for an uncreative and thriftless society'.
A Hayward Gallery Touring Exhibition from Southbank Centre, London