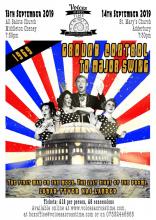 It's September 1969, 2 months after Apollo 11 became the first ever crewed mission to successfully land on the moon and lunar fever is still gripping the nation. Everywhere children, their parents and their grandparents can be heard quoting the famed ‘That's one small step for man, one giant leap for mankind.’ Major Swing returns with his celestial ladies for a night of dancing and singing which - he promises - will be out of this world! Coinciding with The Last Night of the Proms, the evening will feature astronomic hits such as Rocketman, Fly Me To The Moon, ending in a big bang with Last Night classics Rule Britannia, Sea Songs and Jerusalem.

Presented by Voices Across Time, this one night event sees the return of Freddie King (GI Frank George), who has recently graduated from London School of Musical Theatre and is set to take London and beyond by storm. We also welcome back the Bluebelles, featuring Banbury's Lisa Nicholls, Jess Smith and Charlotte Saunders, who have continued to bop, bounce and boogie at prestigious events around the area with Voices Across Time's Musical Director, Joe Cummings, as 'JC & The Bluebelles’.

Profits from the event will go to Voices Across Time's next venture - a one-week schools and care home project in Banbury focused around a new performance of their 2018 musical Till The Boys Come Home. This will be the biggest project Voices Across Time have done to date, and they are thrilled to share it with the community of Banbury.