Last edited by sallydoyle on 2 October 2019 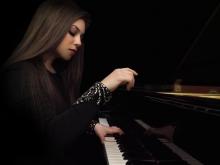 Winner of the 2010 BBC Young Musician competition at the age of only sixteen, British-Turkish pianist Lara Melda is fast gaining international recognition.

Last summer, Lara made her BBC Proms and Royal Albert Hall debut as one of the soloists in an evening devoted to previous Young Musician winners. Other concerto performances have included Britten’s Young Apollo with the Britten Sinfonia and Paul Daniel; Rachmaninov’s 2nd Piano Concerto with the Royal Northern Sinfonia and Kirill Karabits; Mozart with the Aurora Orchestra and Nicholas Collon and a tour of New Zealand with the National Youth Orchestra. She also performs regularly in Turkey, most recently Schumann’s Piano Concerto in Ankara, May 2019.

Amongst many venues over the UK and abroad, Lara has played recitals at the Laeiszhalle, Hamburg and Cadogan Hall, London. She made her Wigmore Hall debut in 2017, following this with two further appearances there in January and December 2018. In November 2019 she returns to Wigmore Hall for an evening recital.

Lara is praised particularly for her Chopin interpretations and her programme for tonight includes the musically and technically challenging Sonata no. 3. Alongside works by Chopin, she will explore the Russian repertoire, including a barcarolle by the under-performed Romantic and master of polished piano gems, Anatoly Lyadov, and four pieces – Masks, Montagues and Capulets, Friar Laurence, Mercutio – from Prokofiev’s superb Romeo and Juliet suite.