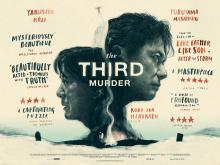 The Third Murder is an existential crime drama through which Kore-eda takes up his trademark themes of unconventional parent–child relations, while subjecting to his forensic gaze the gap that emerges between the letter of the law and justice truly served.

From the arresting opening scenes of a factory worker's cold-blooded murder of his boss, the film employs an intriguing and expertly woven narrative of shifting stories to carry us into a profound essay on the subjectivity of truth. In doing so, The Third Murder stands as an understated yet powerful indictment of the death penalty that continues to cast a long shadow over modern-day Japan.

Tony is the author of books on Seijun Suzuki, Wong Kar-wai and Rainer Werner Fassbinder; a television presenter for a series on Chinese cinema; a screenwriter; film festival programmer; and commentator on DVD releases.

Praise for The Third Murder:

"Sleek and suspenseful, deceptive and profound"
Sight and Sound