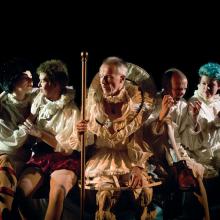 “I’m sick to death of this particular self. I want another.”

Orlando: Poet. Lover. Adventurer. After an evening’s encounter with a traveller woman, Orlando is transformed forever.

Following the sell-out The Tiger’s Bride, Marvellous Machine Theatre Company return with their hilarious and joyful production of Virginia Woolf’s ORLANDO adapted by Sarah Ruhl. Using live music, comedy, drag and movement, they bring to life Virginia Woolf's high-spirited, queer romp through history. Join us as we travel from the court of Queen Elizabeth I to 20th Century London, via Constantinople and the high seas.

"Words, words would not have enough impact to explain how incredible the performance was"

“I'm uplifted by the whole experience - buzzing in fact!"