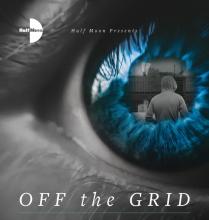 Connor and Kelly are brother and sister. They share the same birthday, but ten years apart. Since the disappearance of their parents, when Kelly was three, they have been dependent on each other for survival. Connor is everything to Kelly: dad, brother, mum, friend – and storyteller. They’ve learned how important it is to believe in something fantastic when you’re living off the grid.

But what happens when you discover you’ve made the wrong decision? Forced to back down, do you sacrifice your beliefs in order to stay together?

Developed in partnership with young people, Off the Grid is an immersive new play that navigates the shocking and heart breaking human story through the underbelly of a hidden society. Follow Connor and Kelly over seven years and discover if their own tale is as hopeful as the fiction they’ve clung on to for their very existence.

Off the Grid is presented by Half Moon, the UK’s leading small-scale theatre company making work for young people and follows on from the company’s 2017 award-winning co-production What Once Was Ours (Off West End OFFIE Award for Best Production for Young People aged 13+).