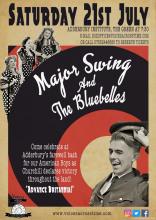 Voices Across Time (VaT) invite you to a night of music, dance and theatre to celebrate
Churchill's announcement of the Victory in Europe and to bid goodbye to Adderbury's
American GI allies.

21st July 2018, the Adderbury Parish Institute will step back in time to the year of 1945
and see the village's own American GI Frank George, under his show persona 'Major
Swing', lead a night of celebratory entertainment of American, English and Big Band
classics. Headlining alongside will be the 'Bluebelles', the delightful three part harmony
group inspired by the Andrew Sisters.

Join us in bidding farewell to the American GI soldiers who came to Britain to aid the
resistance of the German invasion during World War II. Major Swing and the Bluebelles
will take the crowds through an evening of singing and dancing, with wartime hits such as
'Boogie Woogie Bugle Boy', Goodman's 'Sing, Sing, Sing' and Lynn's 'The White Cliffs of
Dover'. The GI's were well known for their lavish parties and boistous? behavior so what
better way to send them off than with a night of American-English merrymaking.

A star in the making, George Sothcott (GI Frank George) is a VaT regular, taking lead
roles in previous productions, as well as performing with many other theatre companies
in the county. This September will see George begin studying Musical Theatre in London
and we wish him luck in this next step of his stage career. The Bluebelles, featuring
Banbury's Lisa Nicholls, Jess Smith and Charlotte Saunders, began life as 'The Andrew
Sisters' in VaT's 2016 Christmas show, "I'll be Home for Christmas" and have since
become established in their own right performing regularly around the area with VaT's
Musical director, Joseph Cummings, as 'JC + the Bluebelles’.

The event will be for one night only and a percentage of the money raised will go towards
supporting VaT's community initiatives. One of these 2018 projects is the professional
recording of their 2017 Christmas show 'Christmas Across Time' which will be produced
as a four-part radio show to be played on local radio this December. In conjunction with
its airing, VaT will visit local care homes in a series of interactive concerts where they will
bring parts of the show to life as they celebrate the festive season with the residents.

Harriet Wells, Voices Across Time's Producer, comments, "Following the success of,
Chansons & Sauvignons in March, we are thrilled to be putting on our second 'hosting'
event, which sees the company taking a small detour from our usual musical productions
to put on smaller, more diverse theatrical shows before our big musical production this
coming October.”