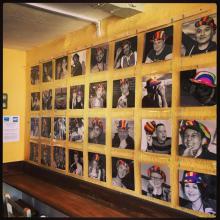 Photography exhibition by Mazz Image and Carling Image - celebrates some people of Oxford as they don the Rainbow Bowler Hat, a symbol of Oxford Pride, and being Proud in Oxford – Proud of Oxford.

From Oxford, Carling Image is a photographer based in Glasgow, specialising in wildlife, landscape, fashion, alternative and LGBT. magenta.badger@facebook.com / www.facebook.com/carlingimage

As a professional photographer Mazz has presented her art around the globe from San Francisco to Moscow, Rome to Montreal. Originally from Sydney, where she owned a studio and gallery for 15-years, her work is regularly published, is held in public archives and enjoyed by many private collectors. She has helped produce Oxford Pride for 10-years and founded the first Oxford Pride Parade in 2008.